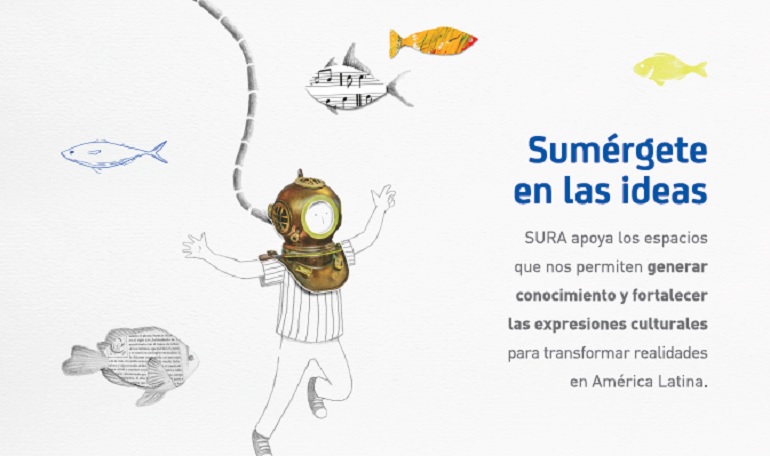 Support the art, culture and dialogue that unites us as a race, is a purpose of SURA. That is why we are the main ally of Hay Festival in Latin America, beginning in 2014 for the edition of Cartagena (Colombia) and since 2016 in Arequipa (Peru) and Querétaro (Mexico), as a result of the expansion of the Company in the region.

This year, Hay Festival Cartagena reaches its 14th edition, after successful days of 2018 in Queretaro and Arequipa. In addition, SURA was co-organizer of the first Hay Festival Forum, in Santiago de Chile.

Between January 31 and February 3, writers such as Chimamanda Ngozi Adichie, Mircea Cartarescu, Yoko Tawada and Zadie Smith will be in Cartagena. We expect more than 150 guests, including writers, scientists, artists and intellectuals who will discuss literature, science, music, art and, in general, relevant topics about the current world.

During this edition in the Walled City of Colombia, we will have the traditional Casa Hay Festival, which brings together activities such as social gatherings with artists, photographic exhibitions and reading clubs with Manuel Vilas, Laura Restrepo and Cristina Morales.

Also, SURA will be the sponsor of two of the most important talks of programming:
- Space that will lead the renowned writer Chimamanda Ngozi Adichie.

- Conversation about Chiribiquete, Cultural and Environmental Heritage of Humanity, directed by the anthropologist Carlos Castaño.

It is precisely in these scenarios where the knowledge and identity of the region is strengthened, through dialogue and the dissertation of speakers of the highest intellectual level. Know the complete program here.

In Medellín (Colombia) there will also be a small edition of Hay Festival, in which SURA will seek to bring art and culture closer to the whole community. The event will take place between January 30 and February 1. Discover the program here.

An unforgettable first time in Chile

Wednesday 7 November 2018 was a memorable day for Chile: Hay Festival first came to this country. In the event that brought together thinkers, writers, scientists and lovers of literature, dialogue spaces were shared with the Colombian photojournalist Jesús Abad Colorado, the Spanish journalist Ignacio Escolar, the French physicist Cristophe Galfard and the Danish author Janne Teller.

Before this meeting, Hay Festival invited Arequipa to imagine the world. On this occasion, it brought together more than 100 writers, scientists and artists between November 8 and 11. The Nobel Prize for Literature, Mario Vargas Llosa, was the guest of honor of the event.

Queretaro also received the annual event between September 6 and 9. In this meeting, Shirin Ebadi, the first Muslim woman to receive the Nobel Peace Prize, gave a lecture on freedom of expression and the Nobel Prize for Chemistry, Venki Ramakrishnan, spoke about the challenges of biotechnology in the 20th century.

At SURA we are very pleased to be the main allies of Hay Festival, convinced that it is a knowledge space that contributes to our superior purpose as a Business Group to create well-being and sustainable development in society.