Prensa/Grupo SURA posted COP 18.3 trillion in consolidated revenues at the end of Q3, for a 17.4% growth compared to the same period last year

Grupo SURA posted COP 18.3 trillion in consolidated revenues at the end of Q3, for a 17.4% growth compared to the same period last year

Grupo SURA has reported its consolidated results for the third quarter of the year, which includes a 17.4% growth in operating revenues compared to the same period last year for a total of COP 18.3 trillion (USD 4,937 million). This, together with a lower increase in expenses (15.5%), resulted in an increase of 37.3% in operating earnings along with a net income that rose by 181.2% to COP 1.1 trillion (USD 302 million) at the end of Q3.

These results were made possible by the continuing levels of performance on the part of Suramericana and SURA Asset Management, which continue to report double-digit growths in premiums and fee and commission income; this together with a recovery with the revenues received via the equity method from other companies belonging to our portfolio, which at the end of Q3 rose by 191.4% on a YTD basis compared to the first nine months of last year, these driven especially by a higher net income figure obtained  by Bancolombia, the sustained growth in  Grupo Nutresa’s income as well as a recovery with that corresponding to Grupo Argos

“The strength and well-diversified nature of our investment portfolio has allowed us to post a level of consolidated results for this past third quarter that exceeded expectations and brought us even closer to pre-pandemic levels. These positive levels of performance are a token of the trust that Latin Americans has placed in our products, solutions and services, through which we are seeking to help provide a more harmonious level of development throughout the region, while creating greater economic value for our shareholders. ”, stated Gonzalo Pérez, Grupo SURA’s Chief Executive Officer.

In fact, taking into account the consolidated income accumulated over the last 12 months, this would exceed by 10.7% the total income obtained in 2019. On the other hand, we can clearly see the effects of our spending controls over total expense and costs, which increased by just 3.2%, this being lower than the current level of inflation in Colombia, and in spite of the impact of two non-recurring events, which also affected our final net income figure, these being a provision set up by  EPS SURA for COP 114 billion, corresponding to expenses not as yet recognized on higher COVID-19 claims; as well as an additional provision on having recalculated the deferred tax figure, given changes to the income tax rate in Colombia, which meant an accounting impact of COP 47 billion.

“The accelerated growth in premium income, fee and commission income as well as revenues received via the equity method went hand in hand with a firm control over expense that, partially offset the impact of a higher claims rate on the part of Suramericana given the pandemic, while operating income on the part of SURA Asset Management is already reaching pre-pandemic levels in 2019. All of this goes to show the strength of our portfolio”, explained Ricardo Jaramillo, Grupo Sura´s Chief Business Development and Finance Officer.

Recent initiatives on the part of Grupo SURA, in its role as investment manager, include: taking part in “Issuer Week”, held in conjunction with Trii (application that facilitates the shares negotiation), which produced 1,400 new private individual shareholders in 183 towns throughout the country; Grupo SURA is one of the Colombian issuers that already trade their shares on the Santiago de Chile Stock Exchange, which is yet another step taken to democratize their shareholdings. Finally, shares worth COP 50,441 million have been repurchased on the Colombian Stock Exchange (BVC), an efficient capital allocation mechanism that generates value for both the Company and its shareholders.

SURA Asset Management (an expert player in the pension, investment as well as the asset management industries) recorded an increase in its fee and commission income of 15.8%, for a total of COP 2.0 trillion (USD 533 million), thanks to a double-digit growth with its Retirement Savings as well as the SURA Investment and SURA Investment Management (SURA IM) lines of business, underpinned by an improvement with the region´s overall wage base, mainly in Mexico and Chile.

Similarly, it is worthwhile noting the levels of performance obtained by Inversiones SURA and SURA IM, having maintained its operating earnings in positive territory for four consecutive quarters. In fact, during the first three quarters of the year, this segment added COP 300,959 million (USD 81 million) in revenues, which represents 15% of the total of this company. All in all, SURA AM’s consolidated net income closed at COP 525 billion (USD 142 million), for an increase of 104% compared to the same period last year.

It is also worthwhile noting the amount of innovation that this subsidiary has incorporated within its portfolio, including the launch of a new infrastructure debt fund, which shall have an impact on projects in Colombia and Peru; the launching of new functionalities for our “qiip” on-line platform providing financial advisory services with a presence in Mexico and Colombia; and debt amortizations coming to COP 185.500 million, for a total reduction this year of COP 505.500 million.

For its part, Suramericana (specializing in insurance and trend/risk management) posted a growth of 14.4% in written premiums, which reached COP 15.4 trillion (USD 4,175 million), driven by the good levels of performance for all three of its business segments, namely  Life (15.3%), Health Care (39.2%) and Property and Casualty (8%). This, together with a lower spending ratio has partially mitigated the increase in the Company’s claims, taking into account that for the first nine months of this year a total of COP 1.5 trillion (USD 394 million) has been allocated to expenses and costs associated with the pandemic. As a result, this Company closed with a net income of COP 4,011 million (USD 1 million).

Highlights of Suramericana’s regional performance include the fact that the Company’s Mandatory Health Care subsidiary in Colombia (EPS SURA), has already applied 4.6 million Coronavirus vaccines. The Company also increased the productivity of its advisory and on-line channels, thanks to the adjustments made to its operating and client engagement models along with new solutions that can be carried out one hundred percent on-line in Argentina, Brazil, Chile, Colombia, Mexico and El Salvador, which shall increase our prospects of gaining new clients in those markets.

The results for Q3 2021 show a more positive outlook for the Group’s consolidated performance at year-end and reflect the operating efforts to get ever closer to the figures reached in 2019, prior to when the material impacts of the pandemic began to emerge.

In its exercise of maintaining a balanced management of human, social, natural and economic capital, where not only the financial front is relevant, the organization has implemented actions guided by environmental, social and governance (ESG) criteria, with which it seeks advance in contributing to a harmonious development of society: 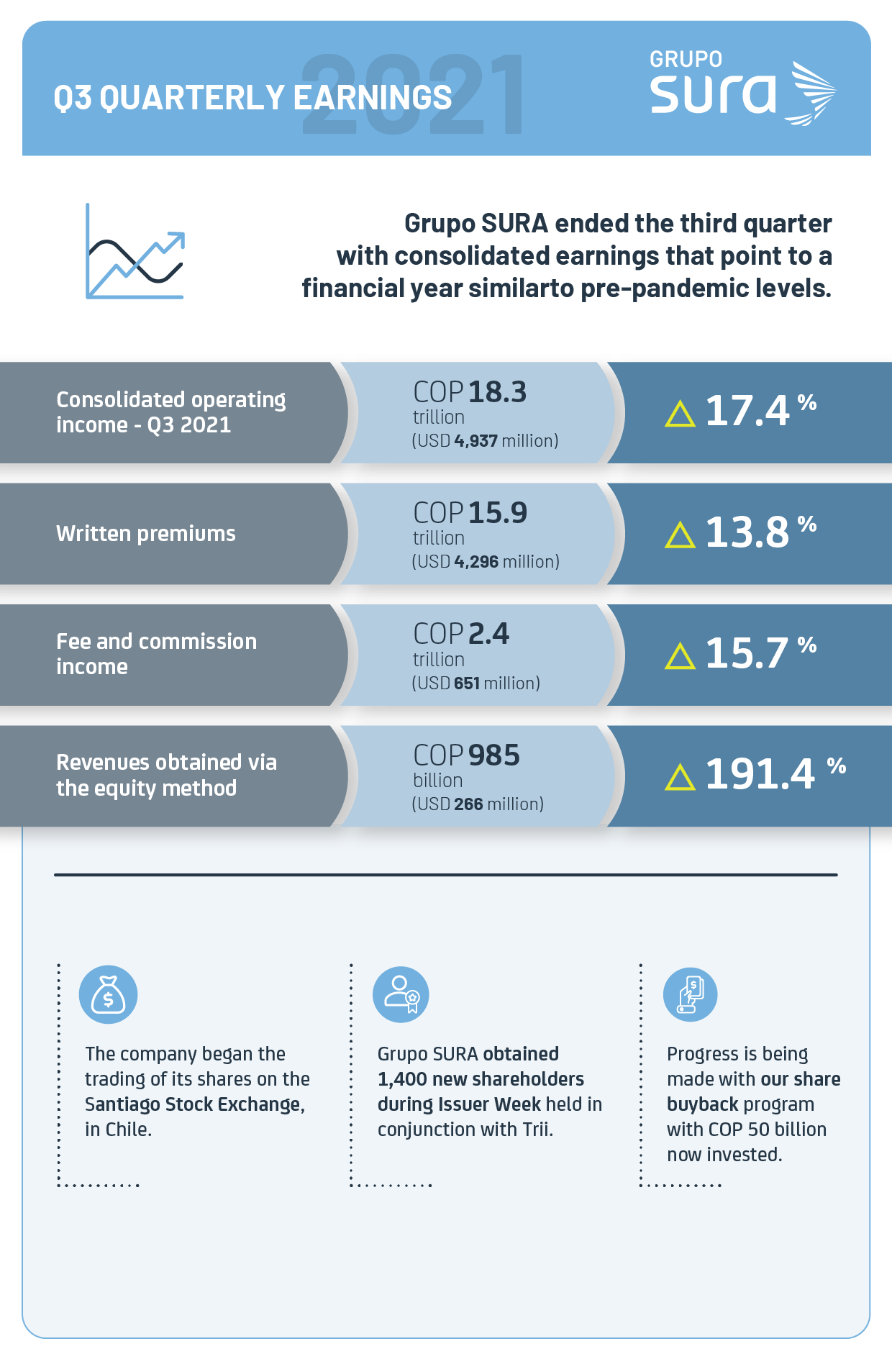 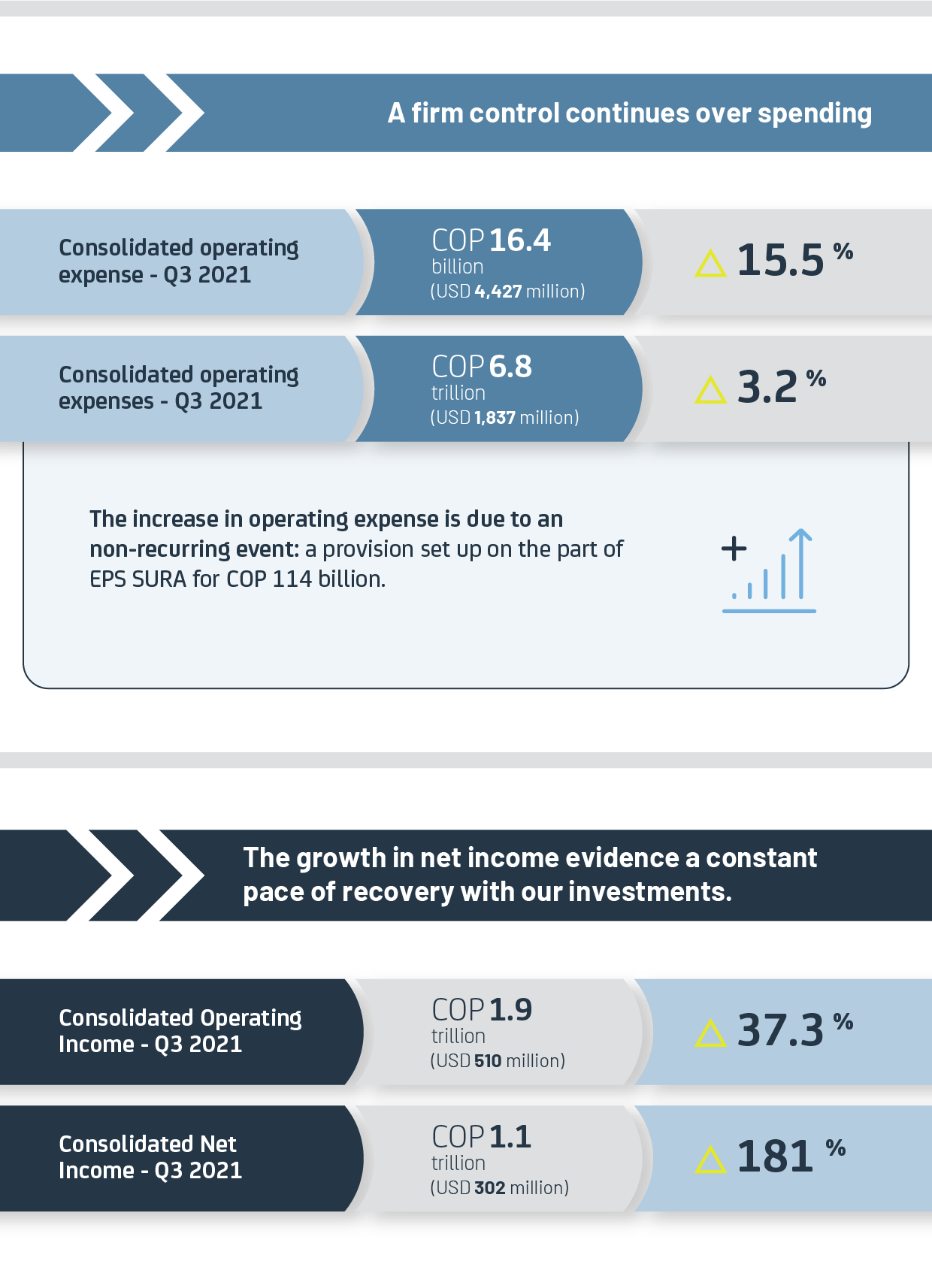 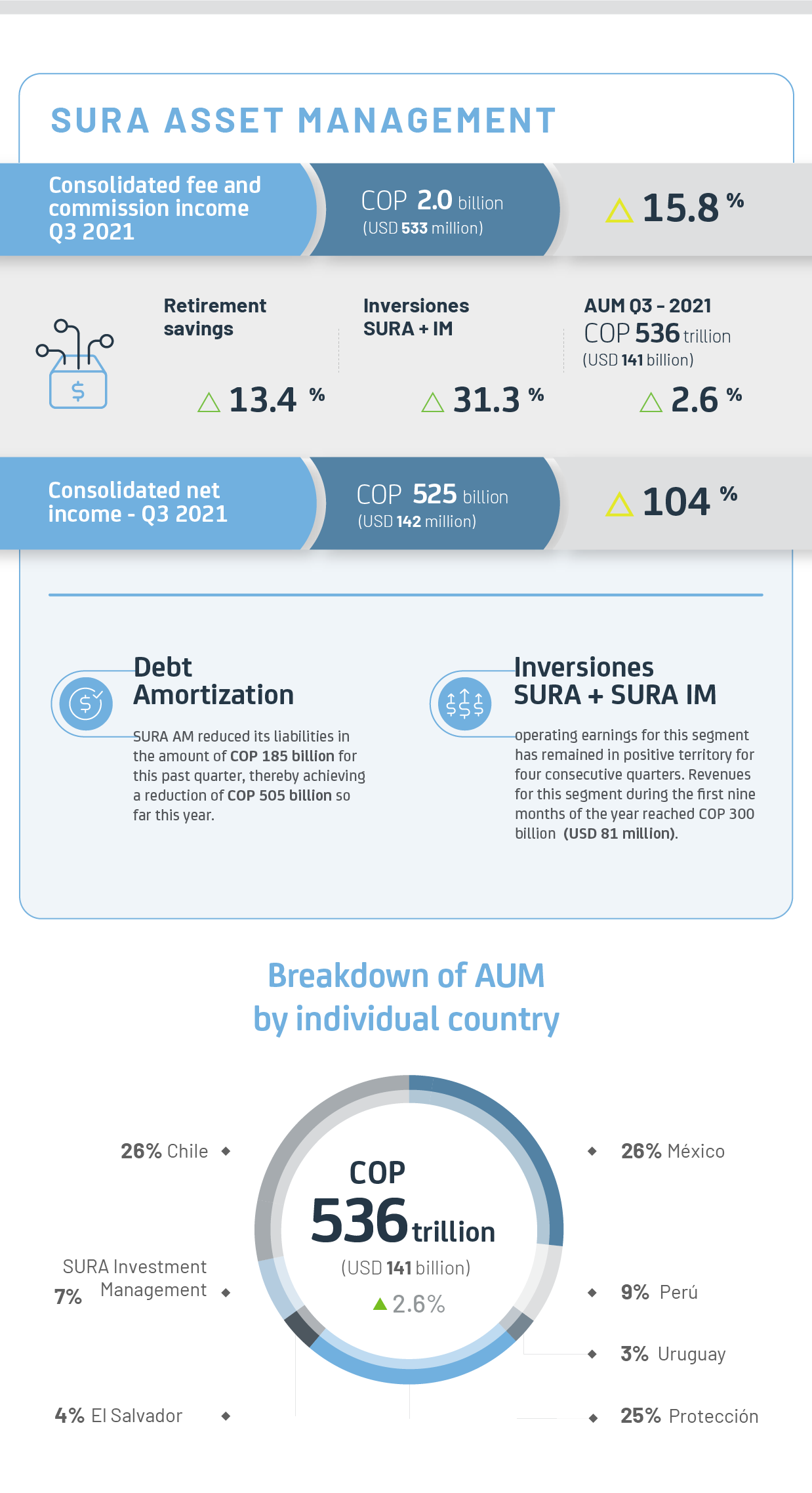 Grupo SURA obtained COP 442 billion in consolidated net income for the first quarter of 2022, thereby producing a growth of 109%, while reaching an all-time high of COP 1.75 trillion over the last 12 months 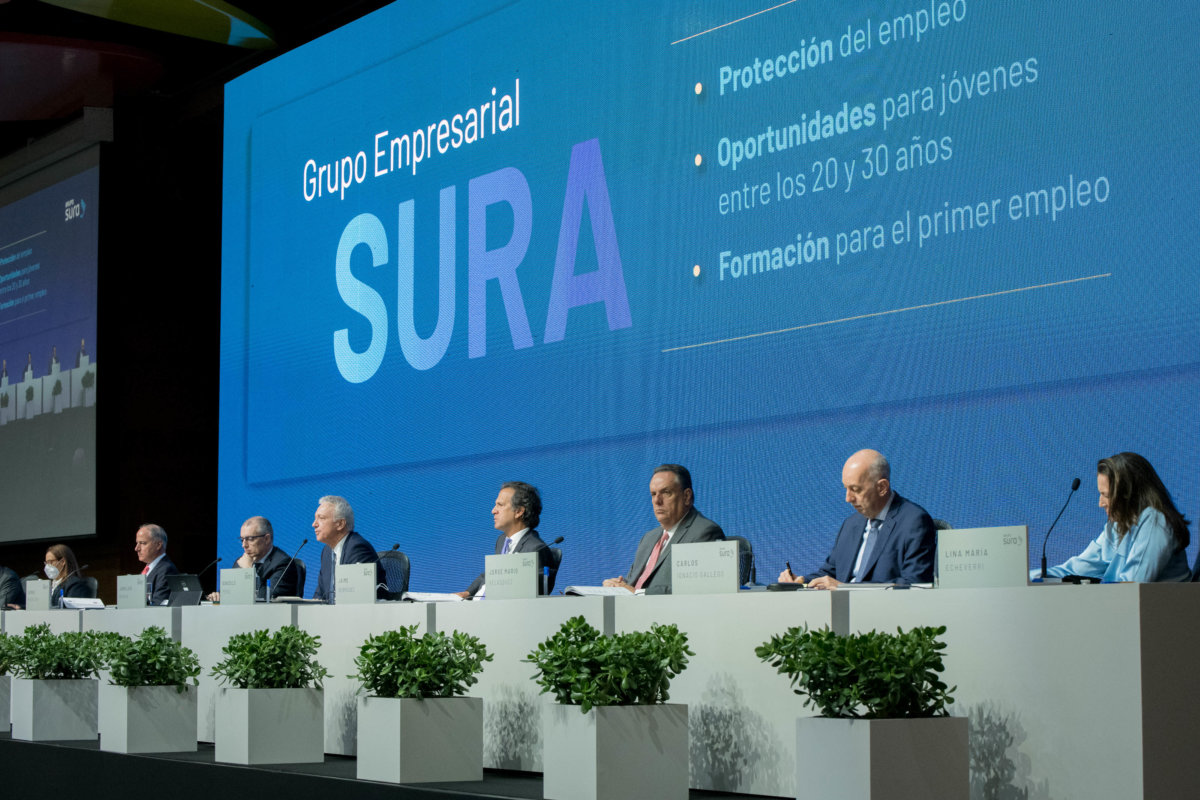 Grupo SURA’s General Assembly of Shareholders approved a 30% increase in this year´s dividend compared to that paid out last year and appointed a new Board of Directors for the period 2022-2024. 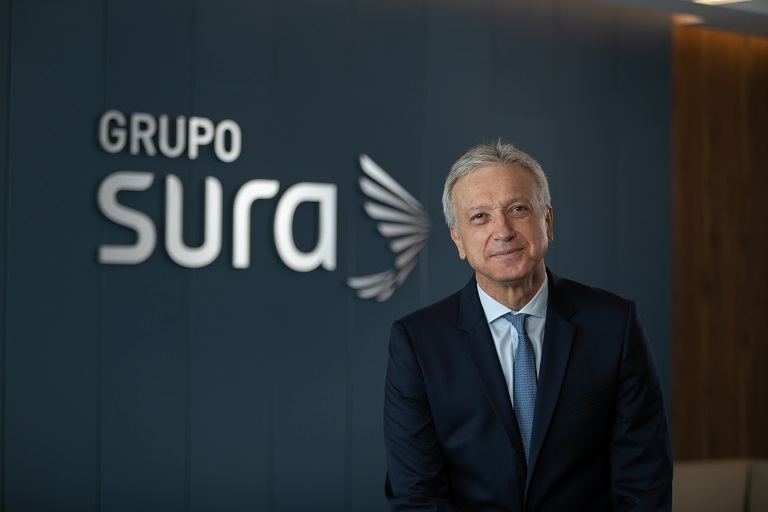 Grupo SURA obtained a consolidated net income of COP 1.5 trillion at year-end 2021, which is 4.5 times higher than that obtained in 2020 and now approaching pre-pandemic levels